On my trip to Iowa in 2003 I went to the Marengo County Courthouse, in Iowa County, to obtain a deed record of when Daniel D. Spracklin, my second great grandfather purchased the land in Iowa County and also his estate file.

Daniel did not have a will, so his estate had to go through probate. Reed A. Spracklin, a son, was his Administrator so he had the responsibility to record all transactions and steps in the probate process.

Usually I study the court clerk books to get the timeline for the probate. They would be the big books where the clerk records the probate process. The documents recorded would be: appointment of administrator, bond, announcements in the newspaper, selling of real estate, appointment of appraisers, inventory of personal property, any affidavits that are needed, selling of real estate, and settlements either partial or final.  This part of Daniel’s estate I have not researched and it might be interesting to see what information turns up.

In 2003, I just walked into the courthouse and asked for the probate packet which is the actual file that contains documents of the probate process like those mentioned above and also any debt receipts from creditors.

Here is a list of the estate packet and papers for Daniel D. Spracklin’s estate.

1). March 9, 1915 – Heirs At Law affidavit – A list of D.D.’s heirs (sons & daughters) and their relationship to him as well as his grandchildren by his son Henry Spracklin who preceded him in death. To be presented in the next post.

2). May 22, 1915 Affidavit of Publication – Notice of the Appointment of Administrator published in the Marengo Democrat. By law they were required to publish the notice for 3 weeks consecutively. 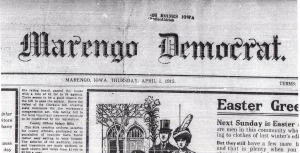 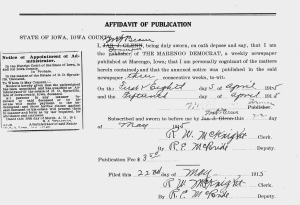 Administer is appointed and it is published in the local paper

R. A. Spracklin, a son, was appointed the Administrator of the estate in the County of Iowa.

5). April 23, 1915 In Probate – Notice of Appointment of Appraisers and Return of Valuation in the Matter of the Estate of D.D. Spracklin. State of Iowa Poweshiek County.

7). November 11, 1915 Petition for Authority to Sell Personal Property, In the Matter of the Estate of D.D. Spracklin, deceased. R.A. is requesting that he be given authorization to sell the 1/3 of the possessions of D.D. Spracklin.

8). 1915 to 1917 Various Checks written by R.A. Spracklin, Administrator for paying creditors, administrator and heirs in final settlement. The bank used was out of Deep River, Iowa.

A claim against the Estate of D.D. Spracklin

9). April 7, 1916 Final Report and Petition for Discharge in the Matter of the Estate of D.D. Spracklin, deceased.

A Distribution Check to Amarilla – Estate of D.D. Spracklin

10). Date Unknown – R.A. Spracklin Partnership, and D.D. Spracklin Estate. Spreadsheet of figures and lists of items involved. It is the same information contained in the final settlement.

11). May 15, 1916 Motion – In the Matter of the Estate of D.D. Spracklin To correct name of the newspaper in which appointment of Adminstrator was published to Marengo Democrat.

12). May 17, 1916 Affidavit of Publication of Discharge Notice in Marengo Sentinel newspaper.

Discharge notice of the Estate

13). Partition Deeds to D.D.’s Heirs-at-law – They are selling the land of D.D. Spracklin to a Mr. Thomas Stapleton, in September and December of 1916 and January of 1917.  See a future post about the partition deeds of the land of Daniel D. Spracklin.

14). Referee Deed dated 31 March, 1915 H.W. Hatter, Referee to Thomas Stapleton. It might be interesting to look at court records for more information about this deed, like the Court of Common Pleas.  This contains a description of the land owned by Daniel D. Spracklin.

About 1905 R.A. Spracklin or rather Reed and family moved in with his parents and lived with them on the farm in Dayton Twp.  Reed was with Daniel and Sarah in the 1905 Iowa State Census. He made an agreement with his father to help care for the farm and his parents in their old age.  See the post: Amarilla’s Father Daniel and half-brother Reed Form a Partnership, November 11, 2014 for more information.

Regarding Daniel’s estate:  Daniel’s farm was in Dayton Twp. Iowa County, Iowa. This is very close to the border of Poweshiek County and it would be interesting to check the probate records of that county and the deeds to see what might turn up.

With the death of Amarilla’s grandmother Mary Anne Delano Keller (3 August 1882)  the land and estate of John and Mary was divided up and partitioned among the children and heirs.  Amarilla and George Barclay were the Grantor’s along with others in the following partition deed.   This is one of several deeds dividing up the land among the heirs of John and Mary Keller.  It is the most significant to me because George and Amarilla Barclay (Barkley) are signees.

The partition deed was dated December 14, 1883.  It was recorded in the Index for Morrow County, Ohio deeds under the name of Charles P. Groves et. al. as Grantor and W.F. Keller et. al. the Grantee.  The clerk’s copy was recorded in Vol. 37, pg. 594, FHL#388692.  Below is a transcription of that deed and my best effort at reading the handwriting of the clerk.

Know all men by the presents that Mr. Charles T. Groves & Mary E. Groves, his wife of Johnson County and State of Kansas, George Barkley & Amarilia Barkley, his wife of [Twin Grove], State of Minnesota & Henry F. Spracklin and Elizabeth Spracklin, his wife of the County of Muscatine and State of Iowa in consideration of the sum of thirty one hundred and fifty dollars to them paid by William F. Keller and Ida C. Keller of Morrow Co., Ohio in receipt  ____is hereby acknowledged do hereby revise, release and forever quit claim to the said William F. Keller and Ida C. Keller their heirs and assigns forever, the following real estate situated in the County of Morrow in the State of Ohio and in the Township of South Bloomfield and bounded and described as follows viz:

To have and to hold said premises with all the _____ and appurtenances hereto belonging to the said William F. Keller and Ida C. Keller their heirs and assigns forever.  In Witness Whereof, the said Charles T. Groves, Mary E. Groves, George Barkley, Amarilia Barkley, Henry F. Spracklin and Elizabeth Spracklin wife of said Henry F. Spracklin, who hereby relinquishes all their right of dower in the premises have hereunto set their hands and seals this 26th day of March in the year of our Lord one Thousand eight hundred and eighty four.

In the presents of us  ___Brown,  J.R. Hanley  Witness to signature of George Barkley and Amarilia Barkley – W.H. [Oelmahan], Rachel [Haileny], H.O. Danley.

Be it remembered that on this 26th day of March A.D. 1884 before me the subscriber Notary Public in and for said County personally came the hereinafter named Henry F. Spracklin and Elizabeth Spracklin his wife the Grantors in the above conveyance and acknowledge the Execution signing and sealing of the same to be their voluntary act and deed for the uses and purposes herein mentioned and the said Elizabeth Spracklin wife of the said Henry F. Spracklin being at the same time examined by me separate and apart from her said husband and the contents of said instrument being by me made known and explained to her then declared that she did voluntarily sign seal and acknowledge the same and that she is still satisfied herewith as her voluntary act and deed for the uses and purposes therein mentioned.  In Testimony thereof, I have hereunto subscribed my name and affixed my Notarized Seal on the day and year last aforesaid.

In Testimony thereof I have herewith subscribed my name and affirmed my seal on this day and year last aforesaid.

In Testimony Whereof I have hereunto subscribed my name and affixed my Notarial seal on the day and year aforesaid.

Deeds can be very helpful in pinpointing the residence of a person and their relationships.   Henry Spracklin  is the full brother of Amarilla.  This deed is significant because it places Henry in Muscatine County, Iowa in 1884 with his wife Elizabeth.  My cousin and I, were finding it difficult to track Henry once he left home after 1870.  So this was great news to find this deed and discover where Henry was living. My cousin descends from this man so it was a great find.

Amarilla and George Barclay are my great grandparents.  This deed connects Amarilla to the Keller and Delano family.  The Delano family is very old and goes back to Philip Delano of the 2nd boat to Plymouth 1620, the Fortune.

Charles T. Groves and Elizabeth (Mary Elizabeth Helt) are descendants of Lovina Lavinia (Keller) Helt, daughter of Mary and John, and sister to Elizabeth Keller Spracklin.  It places them in Johnson County, Kansas at this date.

William F. Keller is the Grantee and Executor of his father John’s will.  He is the younger brother to Lovina and Elizabeth and it places him in Morrow County, Ohio at this date.

Recently I traveled to both Massachusetts and Ohio to dig into the research on Amarilla’s forebears and created another blog that will in more depth the Delano, Keller, Spracklin and Goss connections in Amarilla’s ancestral past.  It is too complicated and large for this Barclay blog.  This blog’s focus was on Amarilla’s and George’s life with references to her connections to these families.   That blog is titled “Solomon Goss of Fearing Township in Ohio.”   http://sgossfamily.wordpress.com/  I have placed a link under “Blogs I Like” to my other blogs.