On the 8th of August, 1927 Harry Spracklin, a nephew of Amarilla’s, died after being sick three weeks. He left a widow and seven children behind.

Spracklin
Harry LeRoy Spracklin, 51, passed away at his home, 731 1/2 West Second street, at 5:30 a.m. today following an illness of three weeks duration. The deceased was born January 4, 1876, at Sigourney, Iowa. He moved to Davenport with his parents when a small boy and has since resided here. Mr. Spracklin was a Spanish-American war veteran, and served in Cuba. He is survived by his wife, Frieda Spracklin; three sons, Le Roy, George and Harold, four daughters, Mrs. Dorothy Sievert, Bertha, Florence and Alice, all of Davenport; two sisters and five brothers. The body was taken to the Stapleton Funeral Parlors, from where services will be held Wednesday morning at 8:15 o’clock, with services at 3:30 at St. Anthony’s church. Interment will be made in Fairmont cemetery.

It is not clear if Amarilla kept track of her older full brother Henry’s family.  Henry had died in 1893 from a tragic accident? I have featured Henry Spracklin’s story on this blog.  You can find him at the top of this blog on the PAGE devoted to his father Daniel D. Spracklin’s life. There you will find a listing of the posts published about Henry and his life.

Harry Leroy Spracklin was Henry and Elizabeth’s oldest child. He was born 1 June, 1876 in Sigourney, Keokuk, Iowa. Harry is buried in the Fairmount Cemetery in Davenport, Scott Co., Iowa. The grave is unmarked just like his father’s.

The funeral of Harry LeRoy Spracklin was held this morning at 8:15 o’clock from the Stapleton funeral parlors with services at 8:30 at St. Anthony’s church. The Rev. J.J. Hopkins celebrated requiem high mass, pronounced the burial absolution, preached the sermon, and conducted the committal services at the grave in Fairmount cemetery.

We go back in time and take a look at the life of Harry L. Spracklin:

After the death of his father Henry in 1893, we find that Harry was living with his mother Elizabeth in Davenport, Scott Co., Iowa. He continued to reside in Davenport till about 1897 per city directories of the time.

We find Harry and Frieda living in Davenport, Iowa in the 1910 census:

In the Iowa State Census for 1915 they are still in Davenport, Iowa

B868 Dorothy Spracklin age 6, Scott Co., 920 Vine – all the children at this address see below. Lutheran, parents born in Iowa, female, white, can’t read and write, years in US 6.

On August 21, 1919 Harry L. Spracklin was issued a land Patent #039057 in Miles City, Montana: North half of Section eleven in Township eighteen north of Range thirty-vie east of the Montana Meridian, Montana, containing three hundred twenty acres. In Testimony Woodrow Wilson, Authority May 20, 1862 Homestead Entry, in Garfield Co., MT.  What happened to this land I do not know and would probably have to consult the courthouse in Miles City or the Scott County Registrar of Deeds to see what turns up.

Harry and Frieda Spracklin’s family is growing as shown in the 1920 census:

Things started to get a little rough for Harry and Frieda in the 1920’s. There son Herbert was killed in a tragic accident.

Coroner’s Jury to Investigate Spracklin Case
A coroner’s jury will investigate the case of Herbert Spracklin, age 6, living at 1509 West Sixth street who was crushed to death under the wheels of a Vander Veer park car last Sunday at West Second street and Western avenue. The inquest will be held at 7 o’clock tonight. 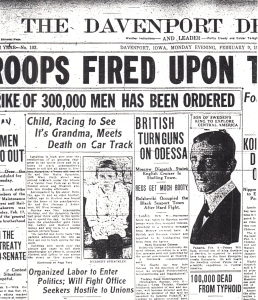 Their daughters Bertha and Florence were involved in a rape case, where they were part of a group of kids attacked by a man. A series of articles appeared in the Davenport Democrat and Leader newspaper in 1923 about this case.

While the little girls were struggling with the court case, their father got into trouble with drunken driving. Harry was part of: Five Drunk Drivers Arranged in Court; Three Held for Jury, July 2, 1923, page 14.

In 1925 Harry and Frieda’s family appears in the Iowa State Census which has a great deal of information contained on this census.

We are missing Alice born in May of 1925.  We have nine children for Harry and eleven for his parents Henry and Elizabeth.

In the next post, I will summarize Harry and Frieda’s family listing the children and what I know about them.

Henry and Elizabeth had a big family and it is a bit complicated.  This is not my family line.  Any additional research that I have done on this family was to learn more about Daniel, the father, and to help my cousin Jerry in any way that I could.  He is the authority on the Henry F. Spracklin and Elizabeth (Downey) Spracklin family, so bare with me.

The children of Henry and Elizabeth (Downey) Spracklin, here I have 11 children:

Harry was also killed when a tree fell on him.  As a result of his death, a guardianship was created using his Spanish-American War pension to cover expenses for most of his children.  This guardianship spanned 20 years and 3 guardians.  It is this guardianship that details the lives of his troubled kids.  I will go into more detail in a future post, here is the source information.

Spracklin: Harry LeRoy Spracklin, 51, passed away at his home, 731 1/2 West Second street, at 5:30 a.m. today following an illness of three weeks duration. The deceased was born Jan. 4, 1876, at Sigourney, Iowa. He moved to Davenport with his parents when a small boy and has since resided here. Mr. Spracklin was a Spanish-American war veteran, and served in Cuba. He is survived by his wife, Frieda Spracklin; three sons, Le Roy, George and Harold, four daughters, Mrs. Dorothy Sievert, Bertha, Florence and Alice, all of Davenport; two sisters and five brothers. The body was taken to the Stapleton funeral parlors, from where services will be held Wednesday morning at 8:15 o’clock, with services at 3:30 at St. Anthony’s church. Interment will be made in Fairmont cemetery.

Here is an obituary notice for Ortha:

Parke – Ortha Raymond Parke, passed away at his home in the Walsh Apartments at 6:40 o’clock this morning, after 18 weeks of illness. He was born in Davenport Feb. 16, 1900, and was educated in the Davenport schools, and has been employed as an usher at the Fort Armstrong theater. Surviving are the parents, Mr. and Mrs. David E. Parke, one brother, Earl David Parke of Duluth, Minn. and one sister, Miss Viola R. at home. The maternal grandmother, Mrs. J.S. Newton of Fairfield, Fla. also survives. Funeral services will be held Monday afternoon at 2 o’clock from Runge’s chapel, and interment will be made in Oakdale Cemetery. Source: The Davenport Democrat and Leader, Sept. 5, 1924.  Davenport newspaper pg. 23, April 5, 1924.

They had three children:

Elmer Spracklin – Funeral services were held on Monday at 10am for Elmer Spracklin, 74, at his home in Persia with Father Wilwerding officiating. He died suddenly of a heart attack at his home Saturday morning. He had been a farmer and a trucker in the Harrison and Shelby County areas most of his life. Mr. Spracklin was born in Davenport. He is survived by his widow, Nellie, four daughters, Mrs. Ruth Ditzler of Council Bluffs; Mrs. Irene Pitt of Persia; Mrs. Margaret Peterson of Mondamin and Mrs. Francis Elias of Ute. Three sons, John and Max of Council Bluffs, Don of Valley, Nebr., A brother Elroy Spracklin of Michigan, a sister Mrs. Bessie Burford in Florida; 18 grandchildren and five great-grandchildren. Pallbearers were Walter Kuster, John Greiner, Woodrow Wilson, William Wilson, Murie Fitzgerald, Russell Ickes. Burial was at St. Mary’s Cemetery in Portsmouth.

Elmer and Ellen had 8 children:

3.  John Edward Spracklin born 11 April 1919 in Portsmouth and died 25 Oct. 1991 in Omaha, Douglas Co. Nebraska.  He was buried in the Memorial Park Cemetery in Council Bluffs, Iowa.  John married Gilda L. George born 11 April 1923 in Muscatine, Muscatine, Iowa and died 11 December 1989 in Omaha, Douglas, Nebraska.  She is buried in Council Bluffs.  John and Gilda had 10 children of which there are living descendants.

5.  Margaret Spracklin was born 8 May 1924 in Portsmouth.  She married a Donald Fisher and also a Donald Peterson and had two children by Peterson.

Ray was a Veteran of World War I.

Obituary of Ray Spracklin – Residents of this vicinity were greatly shocked Thursday afternoon Jan. 17, to learn that Raymond Spracklin had been fatally injured by a tree falling on him. He and his two step-sons Charlie and Donald Newland, had gone to the timber of Jim Foley, two miles sought of Persia, and were cutting a tree. They had planned to fall the tree north and had placed the wedge in the south cut of the tree. Mr. Spracklin hit the wedge, but instead of the tree tipping over it jumped off the stump to the north, causing the tree to fall south. Ray tried to get out-of-the-way but the limb hit him, fractured his skull and broke both legs, bruised his body. The boys went for help at once. Mr. Foley, who was the first come sawed the limb so it could be removed from his body. Mrs. Foley also helped till W. E. Becker came with his ambulance and took him to the Mercy Hospital in Council Bluffs where he passed away at 7:30. Raymond Otha Spracklin was born Sept. 17, 1890 and died Jan. 17, 1935, at the Mercy Hospital in Council Bluffs at the age of 45 years and 4 months. He was married July 5, 1932 to Minne Hansen. To this union one daughter was born, Donna Rae. He leaves to mourn his departure, his wife and daughter and seven step-children; Blanche of Council Bluffs, Anabelle, Dorothy, Charles, Mable, Donald and Kathryn all at home. He also leaves his mother, two sisters and several brothers. He was a loving father. His children’s comfort was his first thought. Funeral sevices will be held Saturday afternoon at the Latter Day Saints Church in Persia at 1:30 conducted by Elder Wm. Chambers of that church. Ray was well-known in this community, having spent part of his life here and his many friends will be grieved to learn of his passing.

This obituary was found in The Republican Newspaper of Harlan, Iowa on Thurs Jan 31, 1935.

I hope I have presented this family as correctly as possible.  There is a lot more information to share.  There was a lot of research done in vital records, census, city directories, newspapers and more. If you would like to know more about these families please contact me.  Most of the information found was through the efforts of my cousin Jerry.  He gave me his permission to present this information to you.