Alexander Barclay died on 9 December, 1905 in Olmsted Co., Minnesota and his body was laid to rest in Farmington at the Corinthian Cemetery in Dakota County. Alexander’s tombstone is featured at Find A Grave. 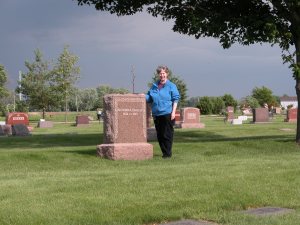 Alexander Barclay’s Tombstone, Me and A Storm

In recent past posts I have written about the heirs of Alexander.  These siblings, nieces and nephews were found as a result of his death and the information found in his estate papers from Dakota County, Minnesota.

Here is summary of the posts written about Alexander’s heirs.  You can find these posts by using the archive box on the right side of this blog, or the search box.

A Summary of Alexander’s Estate

Alexander Barclay’s probate took from December 1906 to April of 1907.

My grandmother Grace A. McDonald petitioned the court to start the process of the probate but she was unable to continue because she was pregnant at the time. A Dr. Rogers was assigned to be administrator of Alexander’s estate process. There was no will so the estate had to be probated.  I refer you to the 2nd post in the list above for a review.

Here is a brief listing of the process in Alexander Barclay’s probate process:

1.  Petition for Administration of the estate and submitting of the heirs-at-law document. 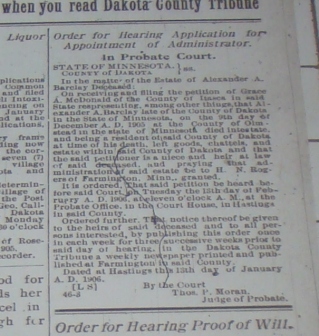 2.  Setting of a Bond and granting of Administration to H.N. Rogers.

3.  Warrant to Appraisers and oath of the Appraisers.

4. Taking Inventory of the Estate which includes the personal possessions, land and other financials like stocks.

6.  Publication of announcements in the local paper for the Creditors and hearing for claims against the estate and payment of those debts.  Printer’s Affidavit.

7.  In this case, affidavits from the children of the older brother John Barclay who was believed to be deceased were obtained, along with affidavits from other family members.

8.  Distribution of the stocks and transferring title to heirs.

9.  Final accounting and Petition for Settlement of the Estate.

10.  Order discharging the Representative and releasing of the surety bond.

The Sale of Alexander’s Farm

In the final account for Alexander Barclay’s estate eleven Receipt forms were filled out for each of the 11 heirs and signed by each one, so this means they had to be mailed, signed and returned. The siblings received approximately $548 plus 1/10 interest in the mining stocks.  Grace Barclay McDonald also received the larger sum.  For John Avery Barclay and Sarah Ellen Barclay they received about $273 plus 1/20 interest in the mining stocks. 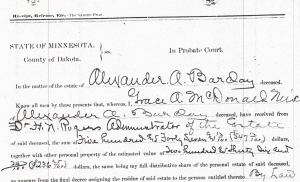 The probate of Alexander Barclay has been extremely helpful in identifying the two families of John Barclay.  Unfortunately, it has not provided information about the origins of the Barclay family nor the mother Margaret of the first 7 children.

Studying the siblings has created more questions and an uncertainty of the actual ages of the children and their birth order.  John Barclay states he came to the United States in 1833 per his naturalization. After having studied the children of this man and learning of their viewpoints about the origins of the family, I think that a new approach is in order in searching for John Barclay’s origins.

This brings to a close the postings on Alexander Barclay’s estate. It is not the close of research which will continue.

In my opinion Alexander left a lasting legacy to his family.  I do know that George Barclay, his brother and my great grandfather, along with Grace, his niece and my grandmother, held him in esteem.